Can I interest anyone in a date?

Cos I have one! Or should I say we do. We finally have a moving in date - we're all set for 30th May. We're having the phone and t'internet installed then, and as they can't install there without uninstalling here, and as both Al and I are permanently glued to our iPads, where the wi-fi goes, we go!

I don't think for a second that we'll have everything moved by that date, but fortunately we're in a position to do it gradually. Every time one of us goes up there we take a box or two, and we're gradually packing up everything that isn't likely to be needed before we move. The 30th is also Al's last day at work for a week, so we can use his holiday to move the rest of our things

It's probably just as well that it's a May date. Back at the start of May in a fit of pique at what seemed like slow - or no - progress, I told Al that if we weren't in this month, he could forget the whole thing as I wasn't moving at all! I wasn't serious - or I don't think I was, but it's best not to take that chance!! 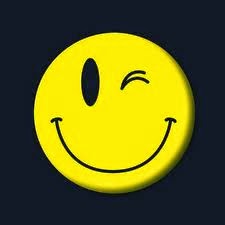 The kitchen is finished!! Woo hoo!! It's filthy and there's sawdust in every drawer and cupboard!! Boo!!

Al's working all weekend - again - so I will be spending my time cleaning. The downside of having a mahoosive kitchen, is that there a re a LOT of cupboards to be cleaned! I made a good start today - removing the blue plastic from the doors, and starting on the insides. The boiler isn't up and running yet, but I've finally been able to stop knocking on neighbours doors with a bucket, begging hot water (yes, I do think they've started hiding when they see me coming!) thanks to the Smeg hot tap. With a judicious mix of cold water, and 100° hot tap water, I can access as many buckets of hot water as I want to clean my cupboards. I say buckets, because there isn't a waste from the sink to the outside drain yet, so I can't use the sink unless I want to flood my lovely new kitchen! 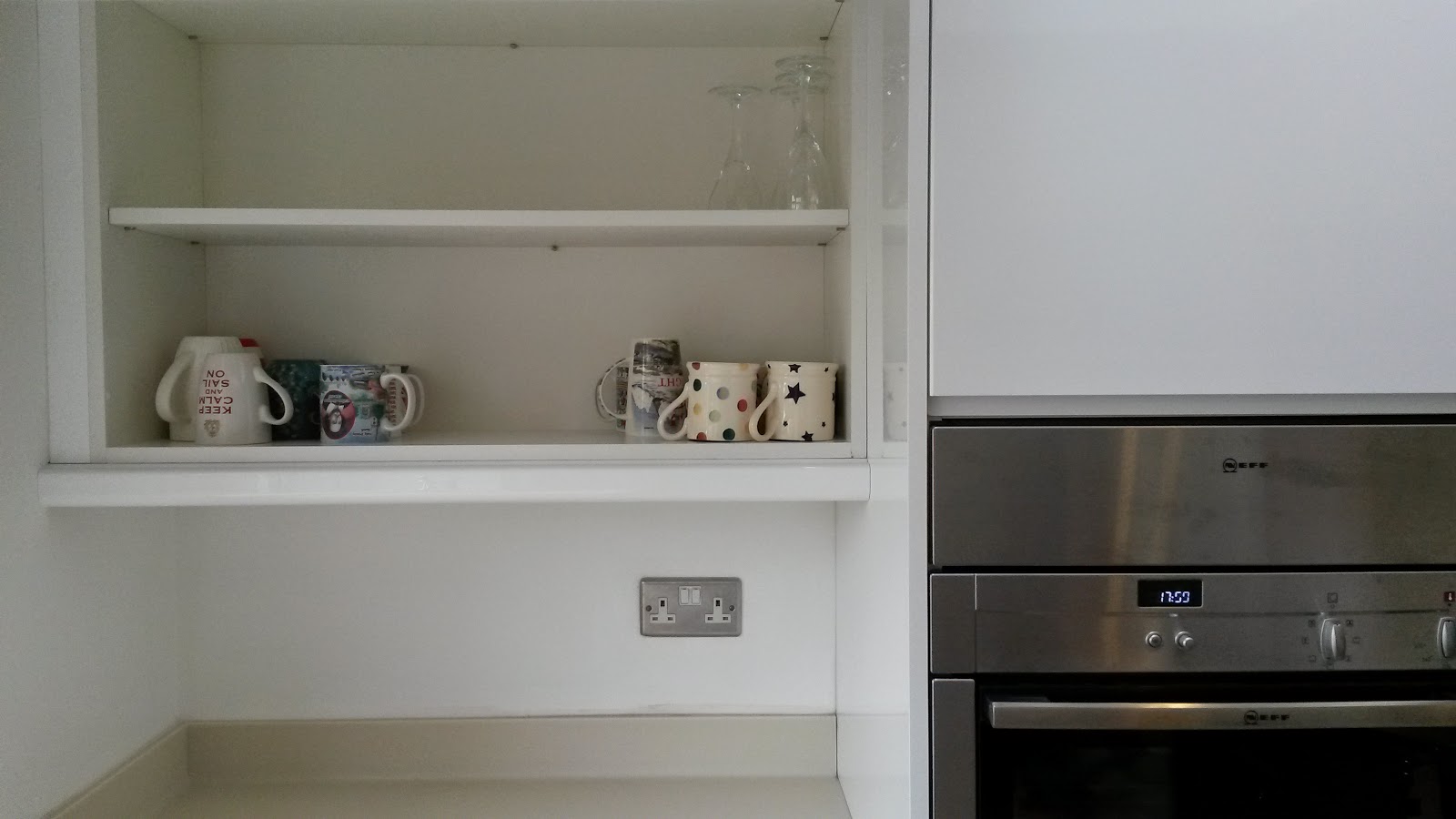 I've cleaned a few of the insides, starting with the most important - the mug cupboard! As anyone who knows me will be aware, I have a slight problem with mugs - I can't resist buying them! I've already installed a few of my favourites in the new kitchen, and as we finally have a working fridge, I can take up a box of teabags, and a pint of milk tomorrow, and enjoy my first cuppa in the gorgeous new kitchen. The only problem is which mug to use? There'll only ever be one first cuppa - these things are important you know!
Posted by Cheeky at 12:29 No comments:

Not with cash, sadly - we're almost spent up, or we will be after we've had the garden landscaped, and bought some new furniture, but we do have what seems like the most luxurious thing ever. After many months without one, we have a flushing toilet! Del the plumber was in for two days this week, and although he still has quite a bit to do, he's finished the main house bathroom, and I love it! 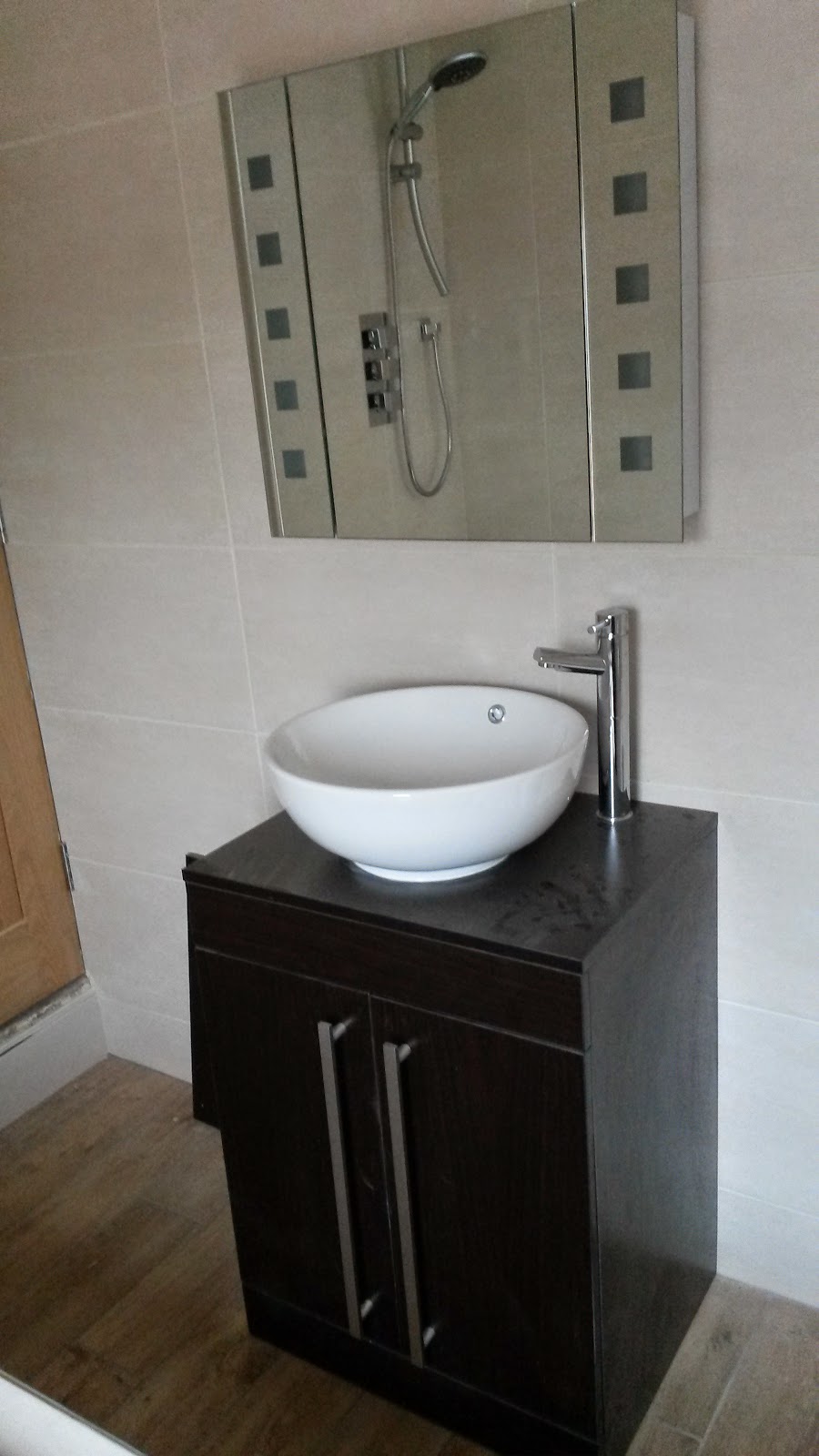 As well as the aforementioned toilet, we also have a gorgeous dark wood vanity unit, with a beautiful basin, and my pride and joy, a double ended bath. No taps, which I admit looks a little odd at first! The bath fills through the overflow at the side, and the valves on the wall next to the shower operate the temperature as well as diverting the water flow between the shower and the bath. Although we've had it all tiled with a ledge to rest my cuppa on when I'm having a soak, we do have a clever removeable panel at the side should we ever have need to access the workings.

There's a folding shower screen still to be fitted, but the shower and towel rail are up, and the room's fully tiled. It's light and bright, with some fabulous wood effect tiles on the floor. They really do look like planks of wood, and I really love the effect they give.

Back in February I posted that I hoped we got as good a finish in the house bathroom as we'd achieved in the en suite, and honestly, I think we've exceeded that! Nothing in there cost a fortune - most of the fixtures and fittings were bought at a discount online, but by choosing carefully, and spending a bit more where it really shows, such as the floor tiles, I think we've managed a really luxurious feel. 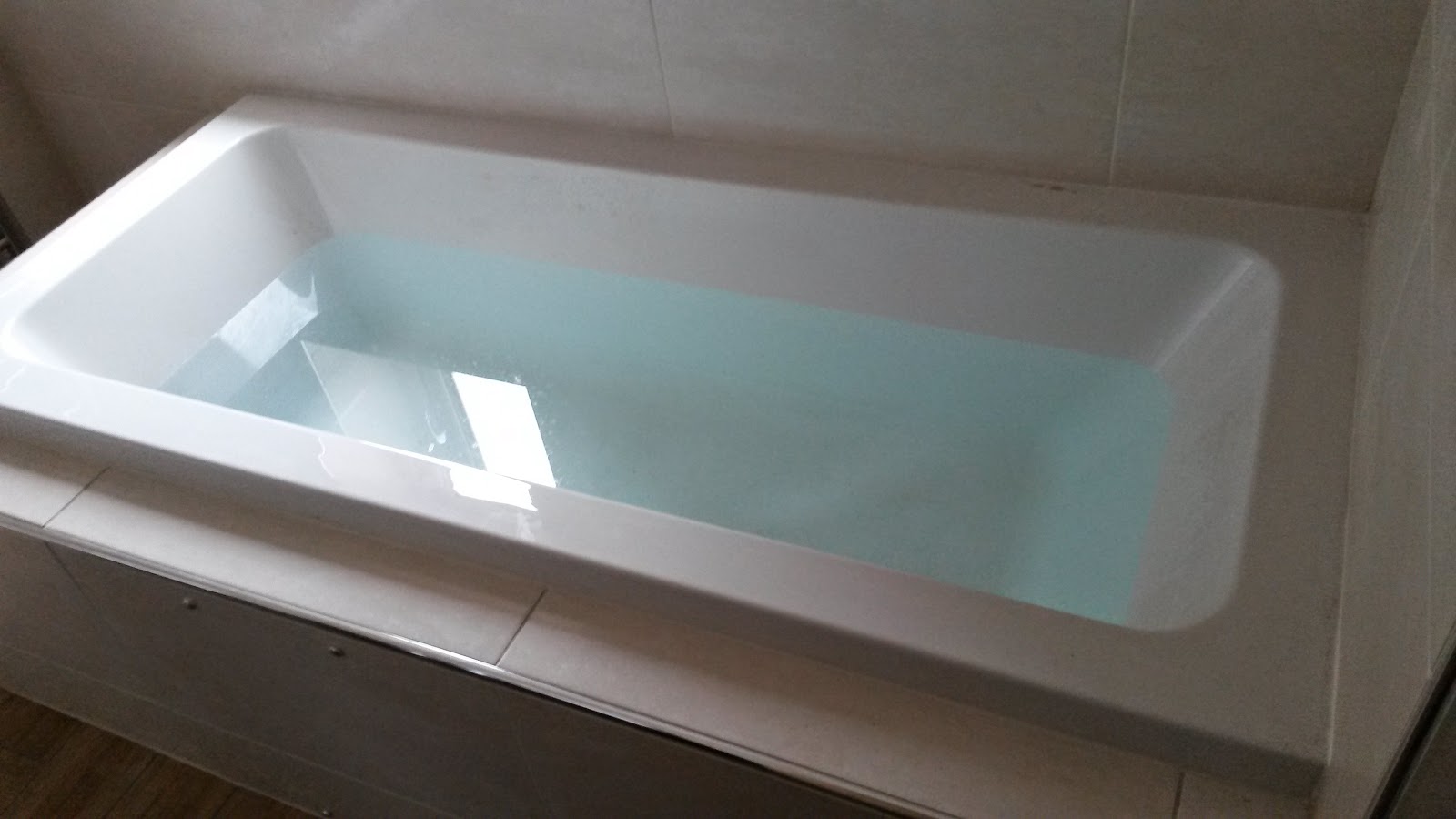 Can't wait for the first soak in that bath - I feel I'm earning it at the moment!
Posted by Cheeky at 12:16 No comments:

When is a fence not a fence? 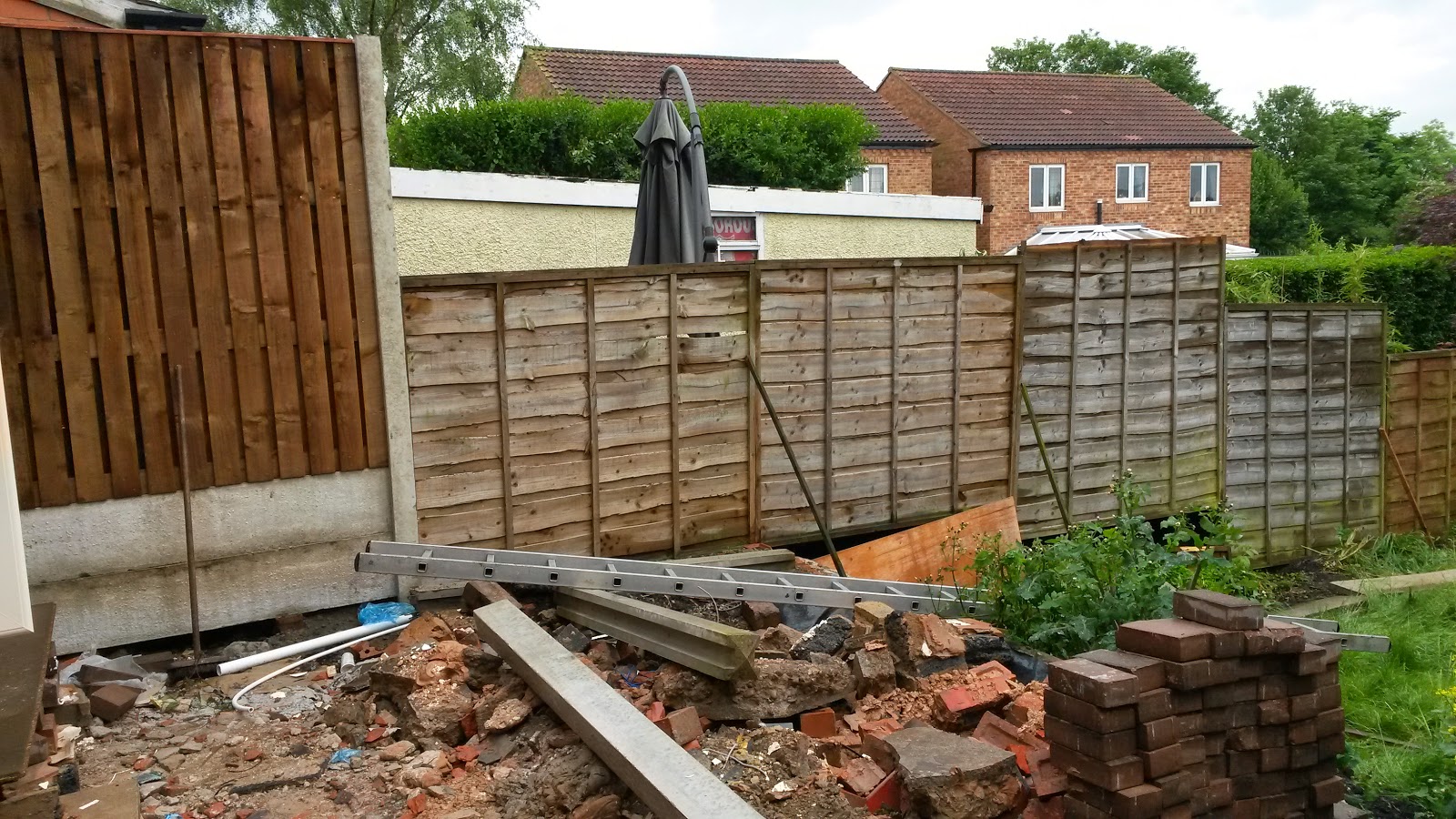 Ok, I admit as punchlines go, it's not that great, but that really is what our 'new' fence looks like!

Apparently, back in the mists of time when the house was built, there was no hedge or fence between us and the other half of the semi, which is probably why the deeds don't show it as being either houses responsibility. For at least the last 30 years or so, the neighbours have been planting hedges and putting fences in, but the current fence isn't very good, and the strong winds this winter blew out several of the panels. As we need the garden to be secure and dog friendly, we approached them about going halves on a good quality fence to replace the existing one. It was all agreed, and I volunteered to organise it.

A local sawmill was hired to supply and fit a good quality double sided fence, and booked in for three days this week. Bruce and his mate arrived nice and early on Monday, and after a bit of a moan at the heat, the weight of the panels, and the size of the 10 foot posts, they set to work. Most of the existing fence was removed, and after several hours, the first panel was installed. So far so good. Next came panel two, and suddenly there was a problem - because the house only had a small patio area before, when mum lived here, there was a sudden drop of around three feet where the next 10 foot post should go. We're planning to have the patio are extended and raised, so we still need a high fence in that area, and if the post was 3 feet lower, then after the garden's done, the fence would only be about 4 feet above the patio!

After much head scratching, Bruce decided that the best thing to do was to wait until after we'd had the landscaping done in July, and then come back, so he'd have a higher level to put his post into giving us a higher fence. Apparently they have to start at the highest point (next to the house) and work down from there in order, so it's not possible to do the bottom half of the garden where the level is staying the same.

I'm a little unclear as to why Bruce hadn't spotted the 3 foot drop while removing the old posts, or why his boss hadn't spotted it when surveying the site and pricing the job,but I was clear about one thing - we needed some sort of a fence there until July. We've recently adopted a very lively lurcher called Lola, and our next door neighbour often looks after a toddler for a relative, so we definitely needed a barrier!

Cue more head scratching from Bruce, but eventually a sort of fence was cobbled together from the discarded panels. As you can see from the photo, there are no longer any fence posts at the top, and some of the panels are just propped up with a single piece of wood, so goodness knows how long it will last, but for the moment at least, we're fenced off!
Posted by Cheeky at 11:59 No comments:

A night on the tiles

We went up to do some cleaning. We couldn't get in, due to the hall tiles being down. 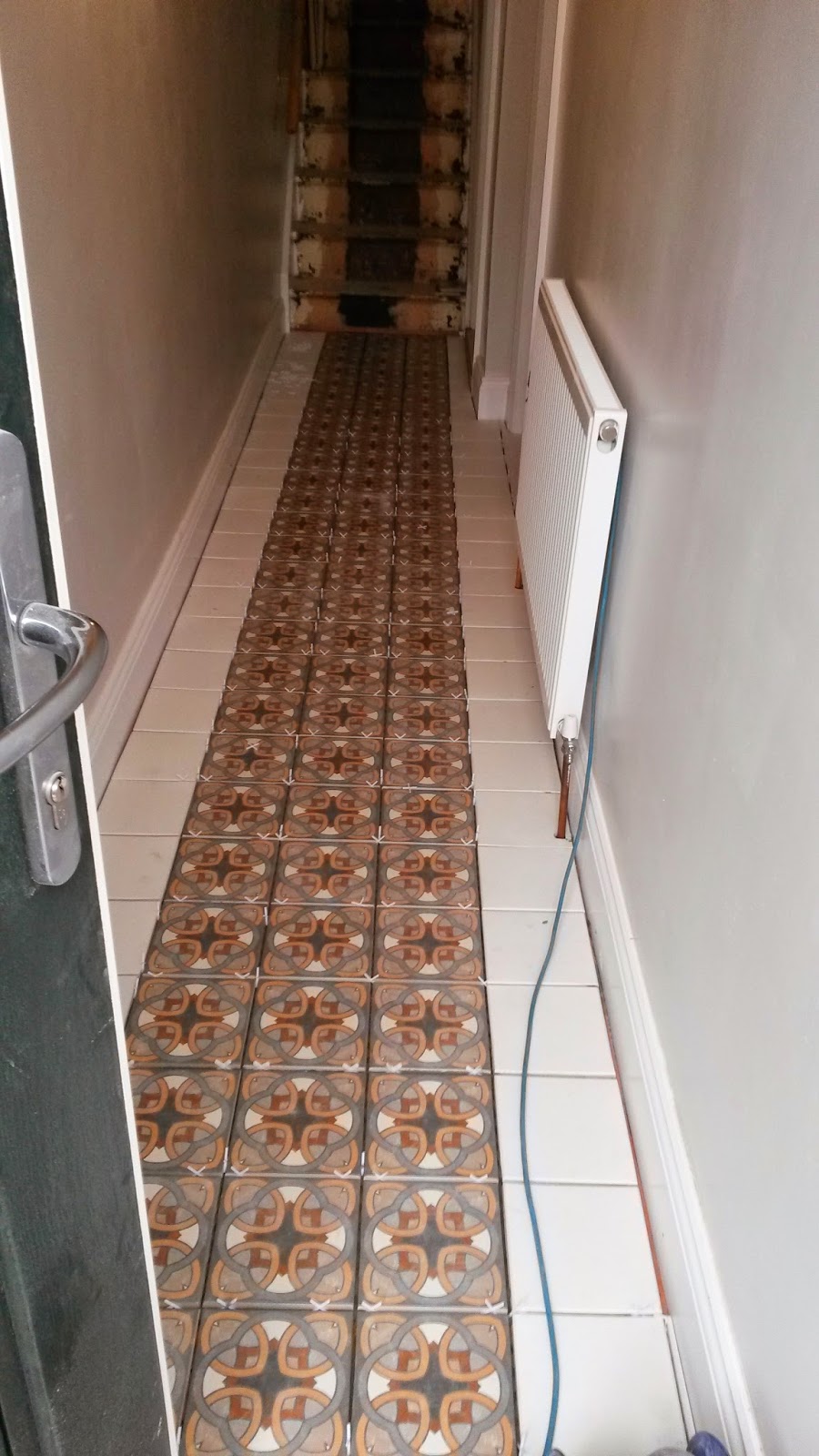 Hall tiles, giving it a bit of a period feel. Modern design and special order from our favourite tile showroom in Leeds - Ceramique Internationale Ltd but gives the look we wanted. 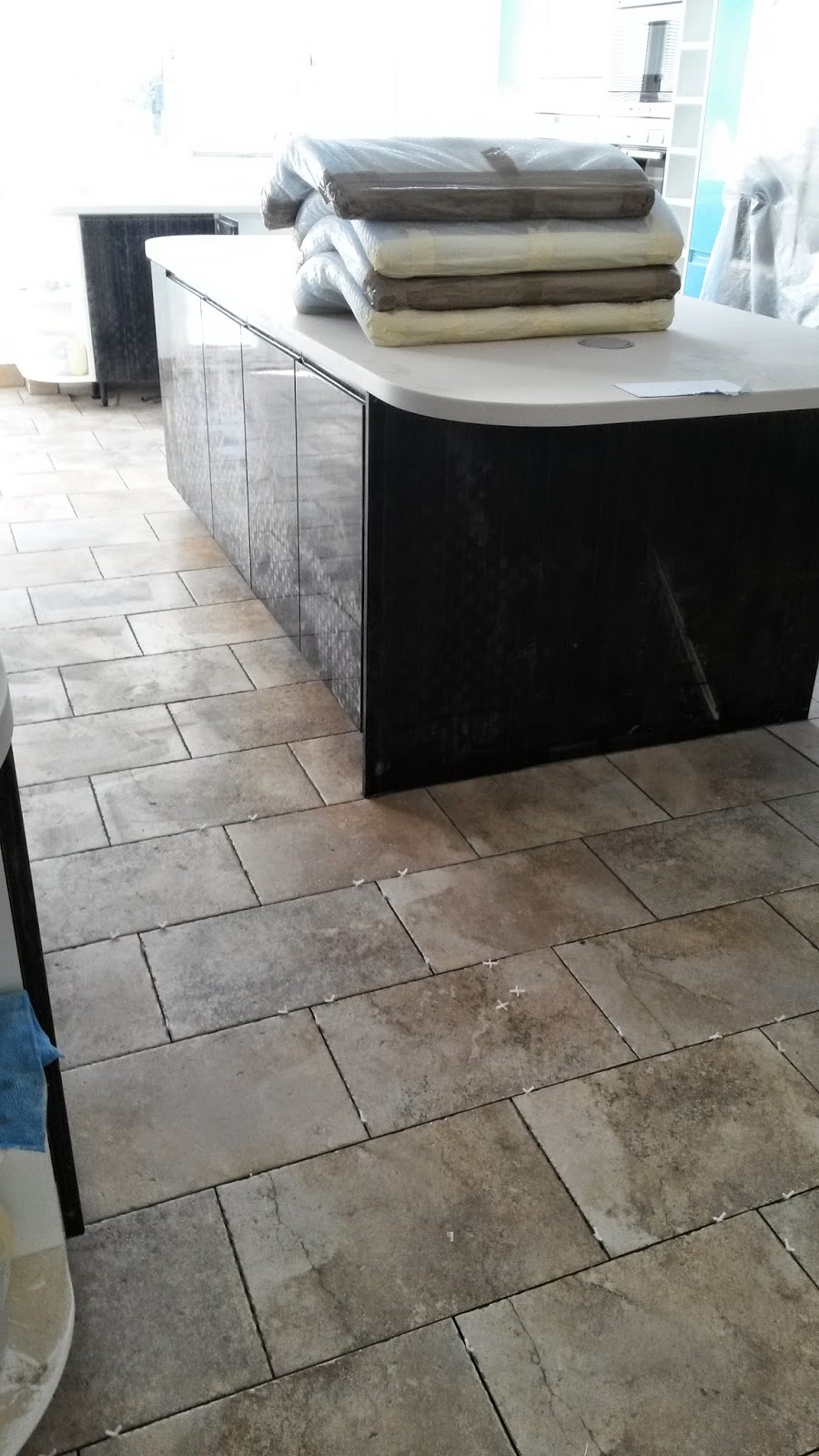 Kitchen floor beginning to look the part. Tikes once again from Ceramique Internationale Ltd  - recommended by our tiling firm, and another great find during this project. 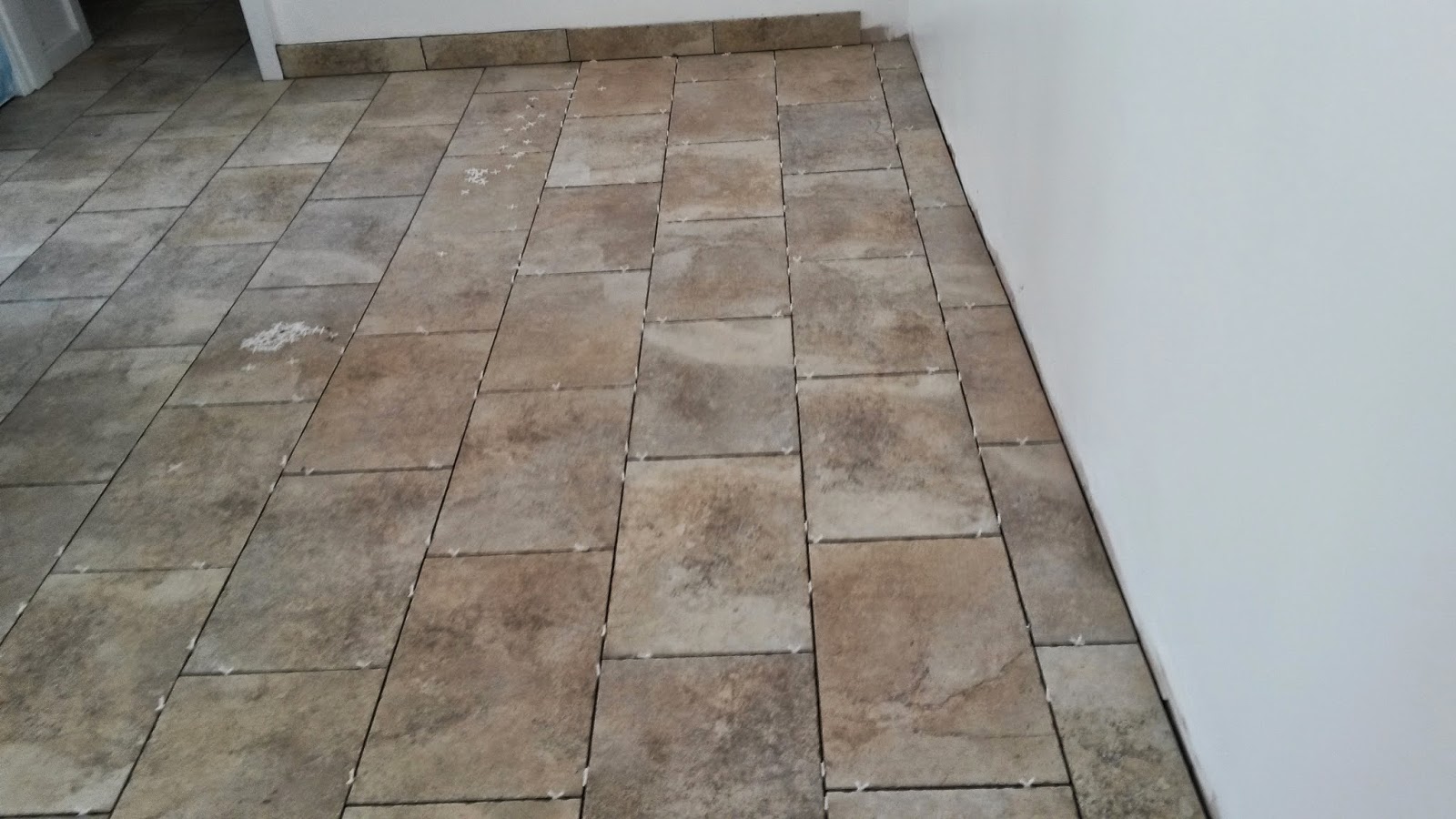 Not finished yet, skirting is being made from the same tile.

That corner is the sofa and beer drinking, whilst watching TV corner.

Corian and the kitchen

Corian is the modern hard wearing work top. If it gets damaged, it can just be repaired.

The sink, splash back and window ledge are in effect one piece. 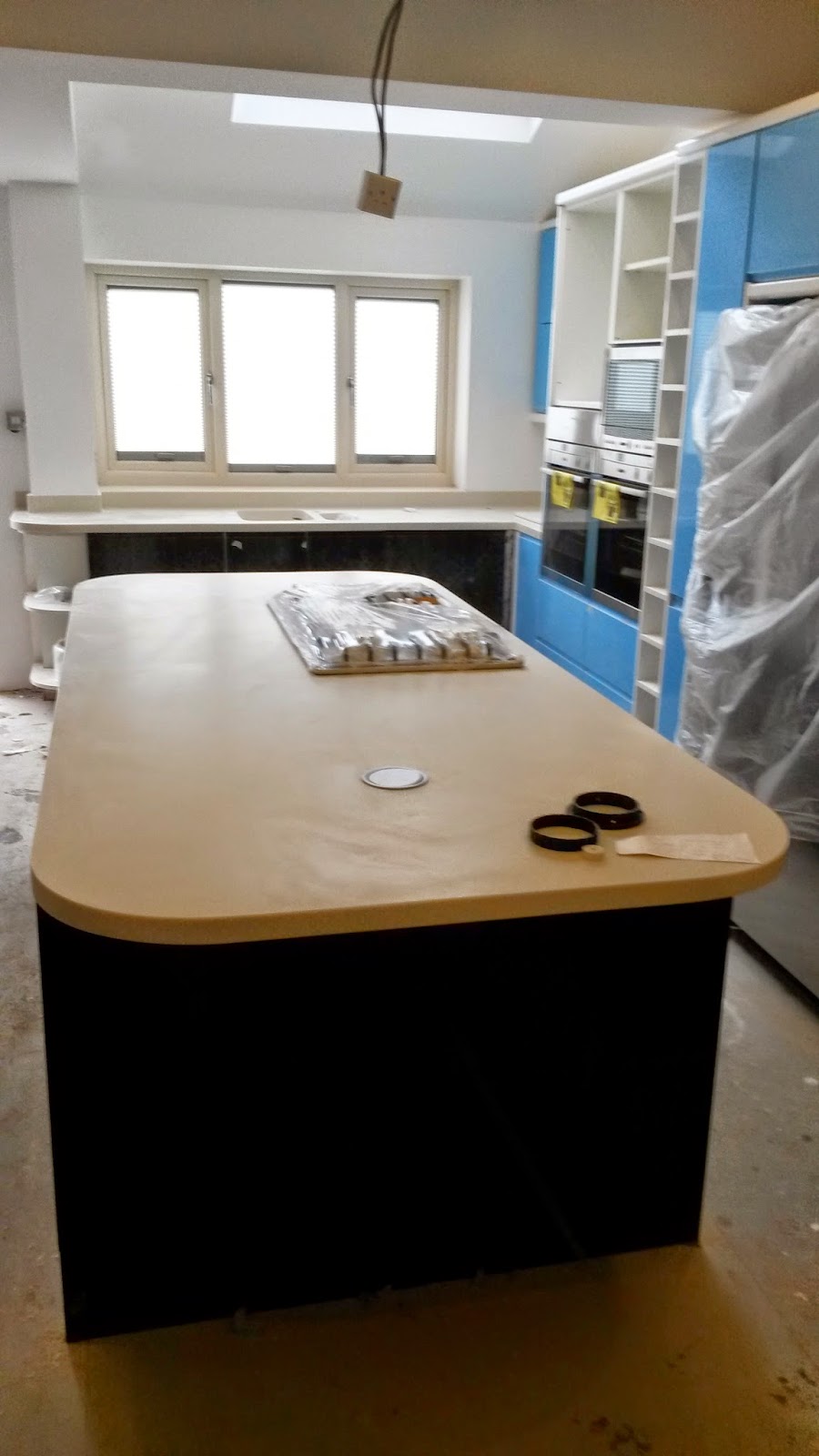 The island, big enough for it's own survival documentary. That hob is a 6 burner and a meter long. Sort of puts the size into some perspective.

Or almost, anyway! We really are in the home straight now. The tiled kitchen floor is being grouted as I type, just a few cupboard doors left to fit and that's the kitchen done. The hall is being tiled later today, and the bedroom carpets are all being fitted on Saturday.

The electrician is finished, and signed off, and the plumber is back on Monday & Tuesday to finish up - although he has a heck of a lot to do! There are still two radiators to go in, which is why the front room & stairs carpets can't be fitted this weekend. He has all three toilets/bathrooms to plumb in - we still don't have a single working loo! Not to mention filling the system and setting up the underfloor heating! He seems to think it can be done in two days though, so who are we to argue?

That really is the last thing though - after Tuesday, apart from occasional visitors such as blind fitters and the cable guy, (plus outside folks such as landscape gardeners, tree stump grinders and fence fitters) we'll have the place to ourselves and can start to move in. It's been a really long haul, but I know it will have been worth it!